Researchers from the University of York are fitting one thousand northern hairy wood ants with tiny radio receivers in a world first experiment to find out how they communicate and travel between their complex nests.

The three-year research project will take place on the National Trust’s Longshaw Estate in Derbyshire a hotspot for these internationally protected ants. This unique site contains more than a thousand nests and is home to up to 50 million worker ants.

Experts will carefully catch the ants and in a few seconds attach a radio receiver of one millimetre to each one. The ants are the size of an adult thumbnail but this process will not interfere with, nor harm them in any way.

Researchers will examine how the ants communicate with each other in their colonies, which are housed in several nests connected by a network of ant highways, with multiple ant queens spread between the nests.

The findings from the research will then be used by National Trust staff on the Longshaw estate to manage the ancient woodland, made up of oak and birch trees, where the ants can be found.

Samuel Ellis, the biologist from the University of York, who will be carrying out the research, said: “This research is about trying to find out how the ants communicate and commute between the vast network of nests and how they travel in this environment.

“The radio receivers act like a barcode to mark out each individual ant. A single ant is not particularly clever but is part of an elaborate system that is clearly performing very effectively at Longshaw. 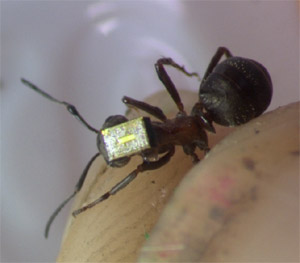 Findings will also influence the land management of Longshaw as the ants depend on sap-sucking aphids that favour oak, birch and pine trees but northern hairy wood ant populations struggle in dense woodland of this kind.

The ants use the honeydew produced by gently stroking these aphids to feed their young and in return the ants protect the aphids.

Chris Millner, National Trust Area Ranger at Longshaw, said: “It is fascinating to sit and watch the ants as they go about their business and they are easy to spot on a sunny day as they gather in vast numbers around their nests at this very special site.

“We will be carrying out some forestry work over the next few years, removing lots of conifer trees from modern plantations which will create a larger area of wood pasture, ideal for the ants to move into.

“The study will give us a real picture of where the ants are and how we can improve the habitat for them and other wildlife without causing disturbance.”

The northern hairy wood ant has an international near-threatened conservation status with the two main populations in England found in the Peak District (including Longshaw) and in the North York Moors.

Or leave your info below and we’ll call you back in 30min or less.

*We’ll come back as many times as needed within the guarantee period to resolve your issue!